I have a serious unease about the arrest of Jamie Bryson and Willie Frazer. (I know nothing of the third arrest) I think it is a misguided and ill-timed political decision that may have serious implications for the peace.This is yet another game by Sinn Fein, who are using the Chief Constable as a foil, and who are probably hoping that the protests will turn violent again. I hope that the protestors do not play Sinn Fein’s game.The Unionist Forum, that I recently attended, was populated by speakers who wanted a level playing field for loyalists and I suspect that these arrests will give argument to those who are already suspecting that they are being treated in a lesser manner.Where are the level headed politicians to advise the Chief Constable? Are they cowering under their bed afraid to make a sound in the hope that the protestors will go away?I also feel unease about the fact that Willie Frazer was refused bail and sits in prison and was refused bail whilst a man accused of the double murder of two British soldiers walks out on bail. 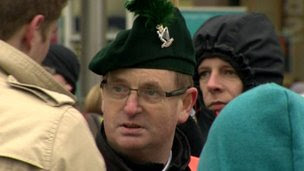 I need to make this clear. I condemn all violence but I do not condemn protests. I would call on protestors to respect and obey the law and not to disrupt the life of Northern Ireland people. To protest is the way of a democracy and democracy can only stand with-in the rule of law.

Democracy does not exist in countries where protests are forbidden.That is part of what concerns me here. The Parades Commission and the parades laws were made to bring a state of stability to the Northern Ireland marching season….. Now, The Chief Constable and the head of the Parades Commission is calling on them to be toughen to stop protests.We allow that at our peril. This is where our level headed politicians should step in…… if they can be found.If the law of the land is broken then that must be addressed but the Chief Constable knows that this is a political gamble. I just hope that this seriously flawed and ill timed decision does not cost lives.

This site uses Akismet to reduce spam. Learn how your comment data is processed.